Greetings!  For once, when I talk about catching up, I’m not just talking about catching up on blogging.  After feeling like I’ve been living under a rock between homework for the Econ Course and playing catch up on missed classes for awhile, I’ve managed to catch up with several FS and grad school friends in the last few weeks now that I have a bit more free time.  I’ve been catching up with FS friends who are moving back to town and grad school friends in the area whom I’ve neglected to reach out to in a long time.  It’s been really good to hear what’s new with them and to see people whom I’ve missed.

Other than that, I haven’t been up to anything much exciting, with one exception.  Last weekend, I saw on Twitter that Colonel Chris Hadfield was signing copies of his books at the Smithsonian Air and Space Museum on the National Mall.  I was covering space issues in Canada while he was on the International Space Station, and it was amazing the buzz he created and how well he connected with people through various forms of social media.  So, it was exciting to hear that he was in town and I wanted to get his new book anyway, so I went down to the Air and Space Museum to get the book.  One of the fun things about living in the DC area.

The German continues to German.  I had a progress test a couple of weeks ago and they said that I was where I should be, which was good.  It’s not over until I actually get my 3/3, but it’s good to hear that I’m on the right track toward it, so hopefully I’ll get my 3/3 and get to Frankfurt on time.   I’m also working through meetings with DC-based people I’ll work with once I get to Germany and doing some of the other stuff I have to do in DC before I head out.  I’ve also gotten my orders and housing assignment, which makes it that much more real. 🙂

Sightseeing in DC is out of this world

What!?! TWO updates in one month?  What kind of craziness is this?  Well, don’t get too excited, this update will be a short one.  After months of living in the Washington, DC area, I finally got out and did some sightseeing.  I’ve been in a rut of going to FSI for class, doing homework, doing errands, etc., and haven’t really taken advantage of many of the very cool things to see and do in the DC area.

And, it’s home to Space Shuttle Discovery!  I will admit that Discovery is the primary reason that I went.  I’m a sucker for space shuttles.  And, this one even had its Canadarm displayed next to it, which ties things back to my assignment in Ottawa where I covered space issues and visited the Canadian Space Agency HQ and saw where they train astronauts on how to use the Canadarm. 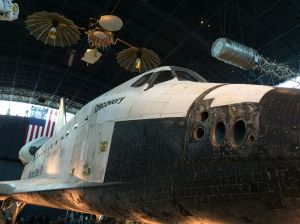