A few weeks ago, my friend “A” asked me on Thursday if I’d like to meet her in Amsterdam for the weekend.  I thought a bit, asked my boss about taking Monday off, and then let her know a few hours later that I was up for the trip.  Amsterdam had been on my list of places to go and I didn’t have any other plans, so why the heck not?

So, I set off for Amsterdam by train Saturday morning, arrived early Saturday afternoon, met up with A, we checked into our hotel, dropped off our bags, and set out on our adventures!

A had spoken with a colleague who’d recently been in Amsterdam and gave her a few tips.  One of which was that you need to arrange tickets to the Anne Frank house in advance.  Often the tickets sell out well in advance, but A lucked out and caught the website when they’d just released a few tickets, so we had tickets and were ready to go.  We arrived a bit before our scheduled time, and got in line.  The museum was really well done and it’s really moving to see how they lived and to learn more about the challenges they faced.  As time marches on and we’re more and more disconnected from what happened during the Holocaust, museums like the Anne Frank House serve as important reminders of the enormous tragedy and as a warning to us to remain vigilant against such things happening again.

After that, we started wandering toward Winkel 43, a cafe a good friend had recommended as having the best apple pie in the Netherlands!  Natuurlijk, we had to check it out.  But, on our way, we got sidetracked by the Tulip Museum.  I mean, who can resist popping in to the Tulip Museum when in Amsterdam?  So, we did and learned that tulips came to the Netherlands from what is now Turkey and that tulips are beheaded annually to help the bulb grow bigger.  We naturally decided that, if we ever started a band, we would name our band “The Tulip Massacre”.  After seeing videos of the tulip slaughter, we made our way on to Winkel 43, where the apple pie was, indeed, amazing. 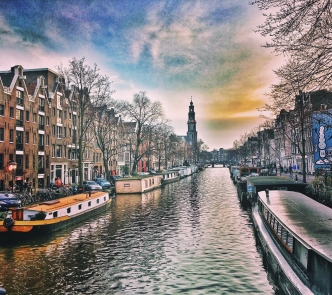 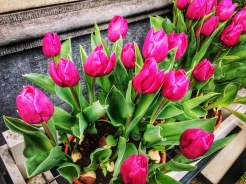 After indulging in the amazing apple pie and catching up on what’s been going on in one another’s lives for a bit, we meandered back to our hotel and just enjoyed taking in the sights.  After relaxing at the hotel for a bit, we decided to venture back out for dinner.  Of course, we had to check out the three-story, floating Chinese restaurant we’d seen earlier.  The food turned out to be pretty good and we had a good time.

On Sunday, we got up early to head to the van Gogh museum.  We stopped by a Starbucks for breakfast and were greeted with a warm “Merry Christmas!” from the barista, who was rocking out to some most excellent tunes.  We had a nice breakfast and then headed on to the van Gogh museum.  A had once again planned ahead and organized tickets for us at 9am, right when the museum opened.   We got there a bit before it opened and wandered around a bit, finding the nearby U.S. Consulate General, the Rijksmuseum, and the iAmsterdam sign.  We then got to the museum and entered as soon as it opened.  A is a big van Gogh fan and had a plan on what to see in which order, and it worked out really well.  We went straight for some of the more popular paintings, and reached them before a lot of the other visitors did.  I’m no art expert, but I do like a lot of van Gogh’s work and I really enjoyed the museum.

After that, we were hungry and found a wonderful cafe, called Blushing Amsterdam, near the van Gogh museum.  I had a super-yummy omelette and A had amazing pancakes.

We then proceeded to the Rijksmuseum and spent several hours exploring.  It was truly overwhelming to see so many of the pieces on display.  Amazing artwork, Delft pottery, doll houses, Yves St. Laurent dresses, and more!  By the end of our time there, our feet were sore, but it was an amazing museum.  We then headed back to our hotel to relax for a bit before it was time for dinner.

A colleague who’d recently visited Amsterdam insisted that we try a restaurant called “Blauw” (blue).  The restaurant served Indonesian street food and it was really yummy.  The entrees came with a lot of different sides to try and it was almost all delicious.  Definitely worth the trek out to the restaurant, which was a ways away from the city center where we were staying and had spent most of our time.

On Monday, we visited the Amsterdam Flower Market and marveled at the vast array of tulips (and other flowers) available.  I couldn’t help but think about how much my dad would have enjoyed it.  Gardening was one of his main hobbies and he would have just loved all of the variety of tulips, bulbs, etc. available.  I could practically hear him exclaiming about he’d never seen this variety or how interesting that variety was.

After we checked out the flower market, we wandered around a bit, took a one-hour canal boat tour, found another neat cafe called De Drie Graefjes for lunch.  The food was delicious and we had a great time people watching. 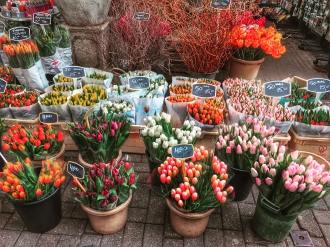 After lunch, we parted ways and I headed back to the hotel to pick up my luggage and head on back to Frankfurt.  All in all the weekend was amazing and Amsterdam was a super fun city.  We definitely lucked out on the weather and had a couple of lucky breaks with getting tickets and reservations.  But, nonetheless, the city was amazing and I would gladly go back again, even if I was repeatedly reminded how bad my Dutch has gotten. 😉

Yeah, so about those updates…

I’ve been lousy about updating.  And, I can’t promise that I’ll be much better in the future.  But, a lot has happened over the last year and a bit, so I’ll at least do a quick run-down of some of the highlights.

Looking forward, I have a couple of trips planned in the next couple of months and some thoughts about some other travel goals for my last year or so here.  My boss will rotate back to DC and her successor will arrive this summer.  I’ll bid on my next assignment this fall.  And, I’m sure plenty of other stuff will pop up.

If the motivation strikes, I may write up some of what’s happened over the last year in more detail, but sadly can’t guarantee I’ll get around to it.  But I’ll at least try not to wait another year to update this thing. 😛