Due to the violence here, there are a lot of police in CDJ.  We have municipal police, federal police, and military police and they all have big pickup trucks that usually carry 2-4 policemen or soldiers inside and 2-5 policemen or soldiers in the bed of the truck.  Sometimes, individual trucks are patrolling but sometimes you see them in groups of two or three. Sometimes, when something’s going down, you see a bunch of them racing past you and you get out of the way as soon as you can.

Here are a few pictures I found around the interwebs of the federal police trucks to show you what I’m talking about. 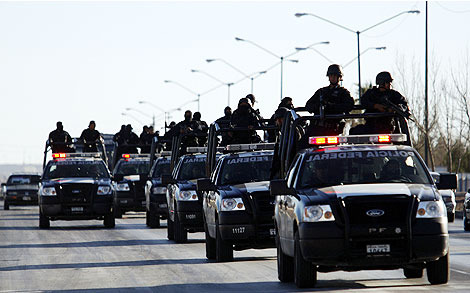 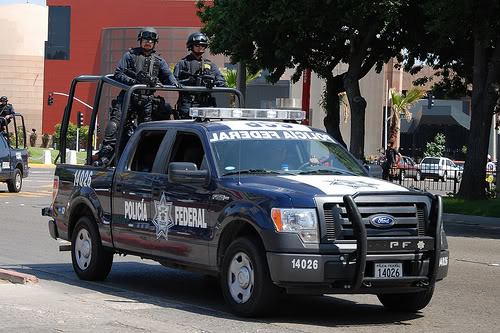 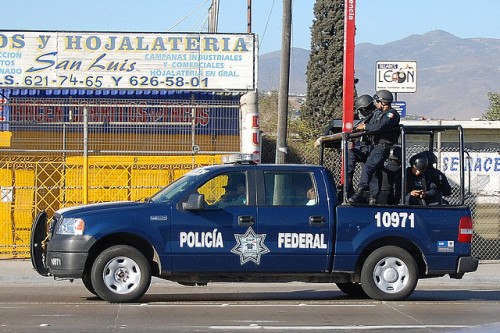 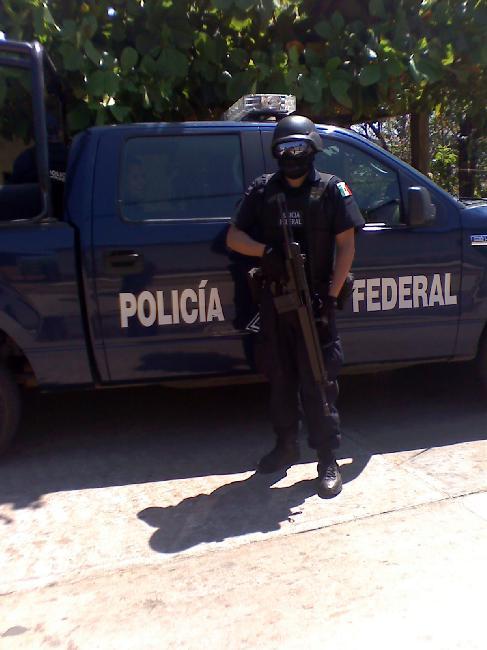 As you can see, they are also armed a bit differently than the average policeman in the US.  I’m not a weapons expert, nor do I play one on TV, but from my observations it looks like they usually carry machine guns or assault rifles as they patrol the city.

So, now that I’ve explained the police situation here, one of my coworkers hosted a Super Bowl party yesterday and as I was driving from my house to hers, I stopped at a red light and there were two Policia Federal trucks in the lane to my left.  The rear truck was about even with my car and the other one was a little bit in front of me while we were stopped at the light, and when the light turned green one truck pulled in to my lane in front of me and one pulled in behind me.  So, there I was with 4 to 6 guys with machine guns in the truck in front of me and 4 to 6 guys with machine guns in the truck behind me.  I decided that that was not really where I wanted to be, and moved left into the lane that the police trucks had been in, they proceeded to pull over the SUV that had been stopped in front of me at the light, and I went on my merry way to the Super Bowl party.

That was the first time I’d been sandwiched between two of the trucks, but I have stopped behind them or next to them at lights before.  When I first got here, being stopped or driving next to them made me extremely nervous and I was concerned that I was one speed bump or pothole away from a gun shot to my car or me.  However, probably the thing that surprised me the most about the whole thing that happened on the way to the Super Bowl party was my reaction.  If this had happened when I first got here, I probably would have freaked out and probably would have thought something along the lines of “OMGWTF! What the hell are these guys doing!?! I’m going to die! Oh well, it was nice while it lasted.”  However, yesterday, I just felt annoyed and inconvenienced more than anything since I was going to have to make a right turn soon and they were in the way.  Experiences like these to show me just how much my life has changed since I got here, just how different “normal” is now, and how, despite the violence, there are still very normal things going on, like the police pulling cars over.